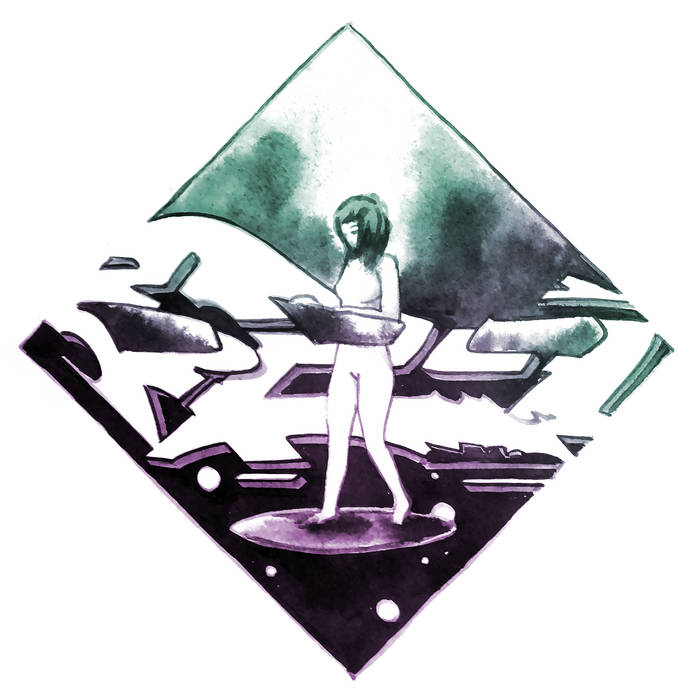 Beats and other music by REQ, with music samples, vocals and spoken word recitals by Smudge

'Calypso Dark' is REQ's first new music since 2002's 'Sketchbook' album for Warp Records. As part of an ongoing collaboration with his friend and muse Smudge, it serves as a digital taster EP ahead of a new double album proper, due for release on Seagrave in mid-2020.

Named for colour #139 in the Molotow spray paint series - a shade of green that glimmers faintly across the ink-washed album art - the title track, like the opener 'Towards Nightfall', evokes a sense of twilit enchantment with life, with the world, with what it might yet be to journey and adventure in the cosmos. Husky over dusty drum patterns, Smudge intones fragments of romantic poesy and intention with an apparent weight and maturity that belies her youthful appearance - inspiring rich images of what it is to grow, to live and experience, and eventually to age, decay and pass into oblivion.

But REQ's new mini-album - his first in 18 years - is perhaps better understood as another installment of what we have elsewhere referred to as 'REQ-ism' - which might have something to do with art and eroticism, but isn't necessarily about graffiti culture or spray paint at all. With Smudge as his muse in this instance, there's certainly a gentle mischief at work, but something much less focused on the fame / infamy game - and what is often perceived as the egosim in traditional graffiti name writing - with something that emanates instead from other currents.

The backdrop of classic REQ beats and grooves remain as insistent on this collection of recordings as they ever did, yet might here be seen as less of a nostalgic summary of his erstwhile hip-hop beatmaking, and more as an affectionate expression of his 4 years of drawing and painting with Smudge. 'Calypso Dark' offers a soundscape for other vibes and feelings to flourish - in both himself and the listener - stimulating work that acknowledges and emphasizes a cast of impish guile and mischief in his perception and experience of femininity... in both himself and others.

Featuring Oakland sounds from the Smart Bomb collective and Samplelov.